Have a Fanatec ClubSport shifter? Does the shift knob twist from side to side? No? Lucky you.

If yes, today I set out to find the culprit and solve it.  I'm happy to say I found the culprit, and solved it with a can of Coca Cola, and will show how you can too!

I wasn't quite sure what I was looking for, so I ended up taking the entire shifter apart.  Everything! Turns out, you actually don't need to take much apart.  However, having taken it apart, I must say, this is one solid piece of kit.  I'm a little surprised at myself for saying this, but good job Fanatec on this one.

The problem of the twisting is a tolerance issue.  Inside the pivot assembly of the shifter, there is a threaded headless Allen bolt, or pin, that the shifter shaft slides along so that it can be pressed down for reverse.  The gap between the shaft's opening and the pin is a bit too loose, and is why the twisting occurs. It's easier to explain with a picture: 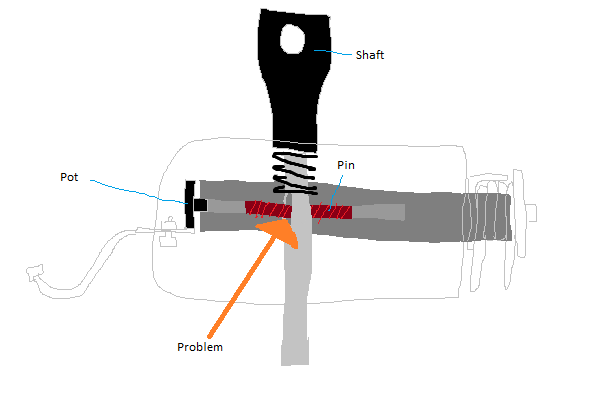 First step obviously is to detach the top plate from the housing.  There is wire that needs to be disconnected, so DO NOT PULL OFF!! When you unscrew the top, tilt to the side and gently pull out the wire.

The entire shifter housing is attached to the top plate, like so: 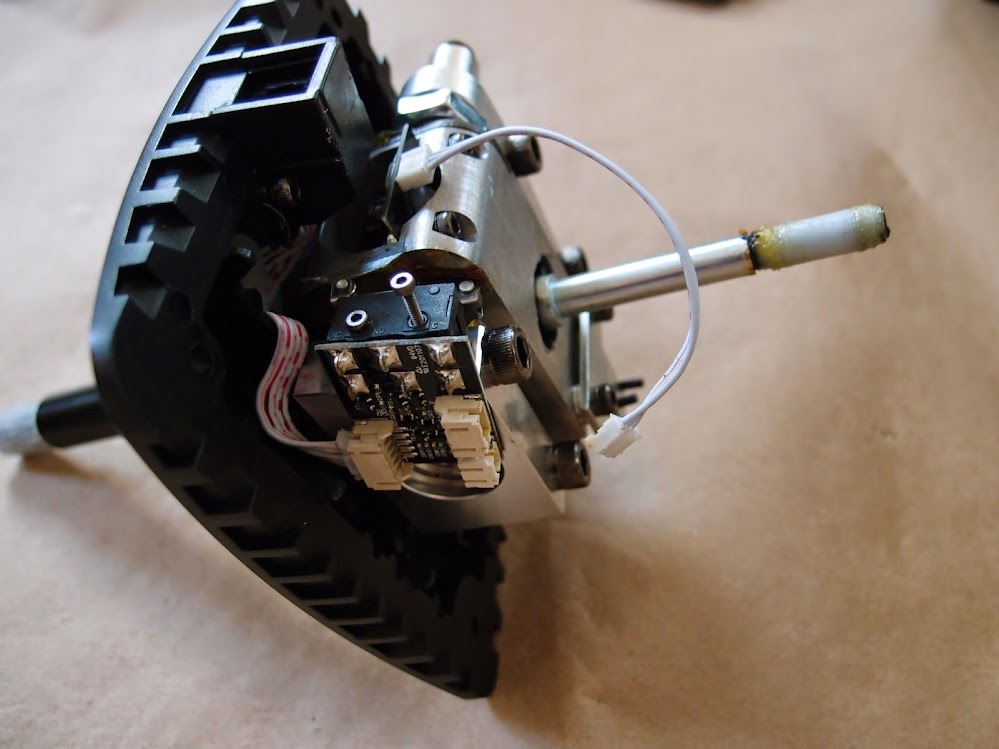 To make it easier to work, you can detach the mechanism from the top plate via the four large Allen bolts. To prevent causing damage to the board, I removed it by unscrewing the small Allen bolts as shown above, and disconnecting the wire leading to the potentiometer.

NOTE: All bolts are tightened with the red Loctite, and require some effort to unscrew them, so you must be careful not to break anything! 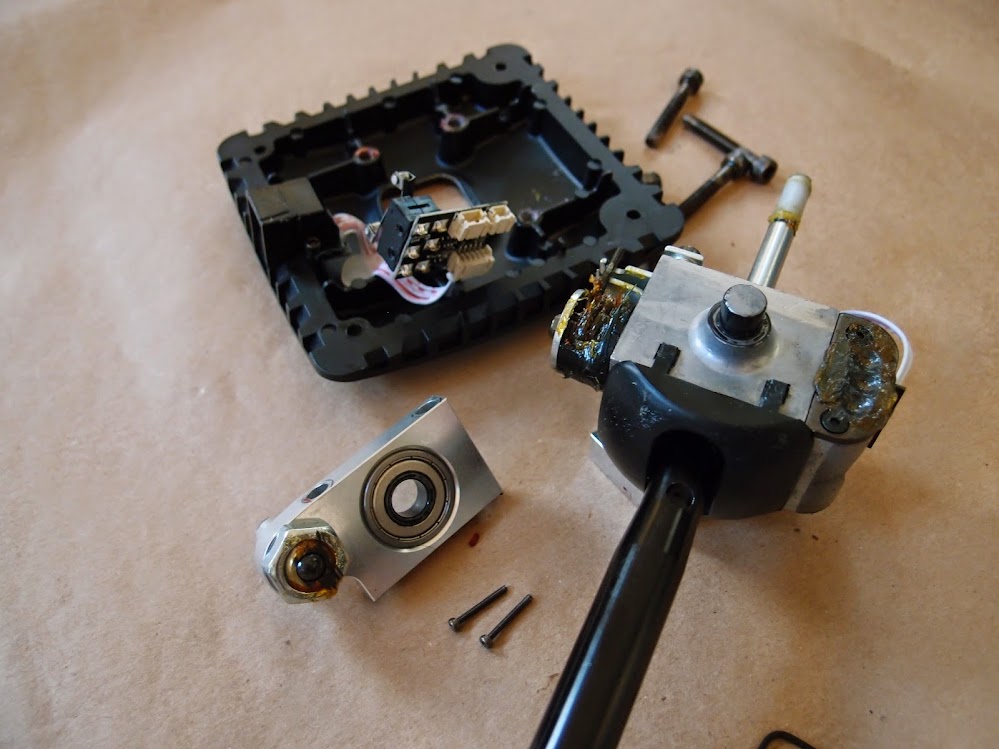 The real nice thing is the detent ball doesn't fly off! God knows how many times I've taken my old G25 shifter apart and having that thing fly off to nowhere.  G25 shift modders will appreciate this.

Next, you have to separate the black shift shaft from the silver one.  This one take a lot of effort because its tightened with a lot of that red stuff, and it's a big bolt.  Best way is, grab a giant pair of pliers to hold the housing, and stick a screw driver in the shaft's hole and twist it counter clockwise.

Trust it, it will turn! 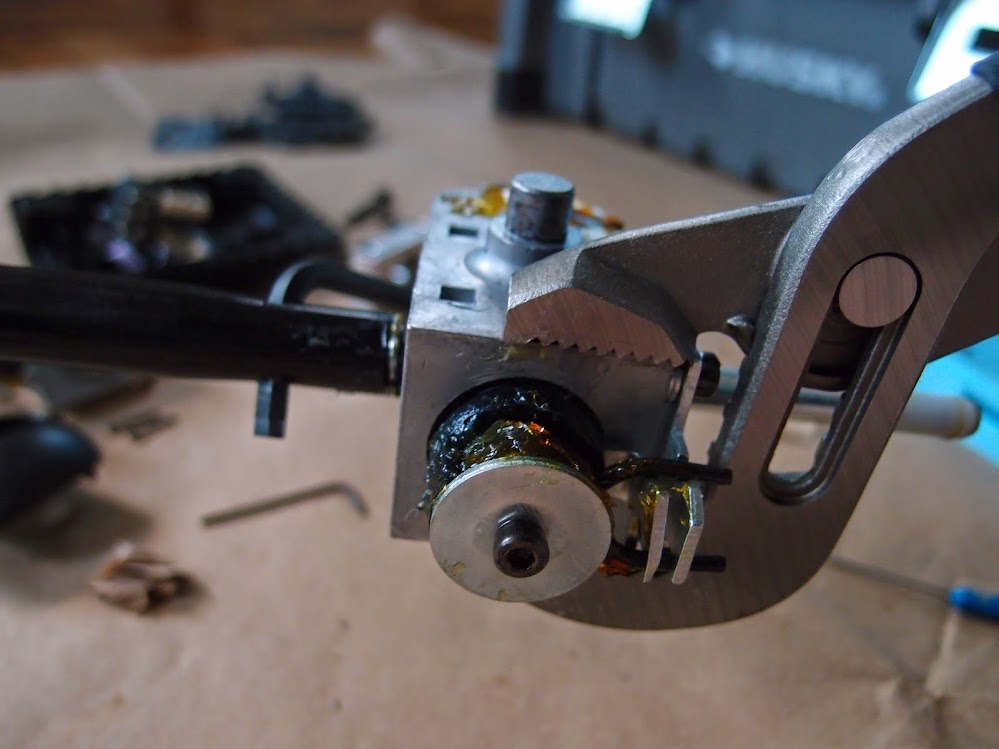 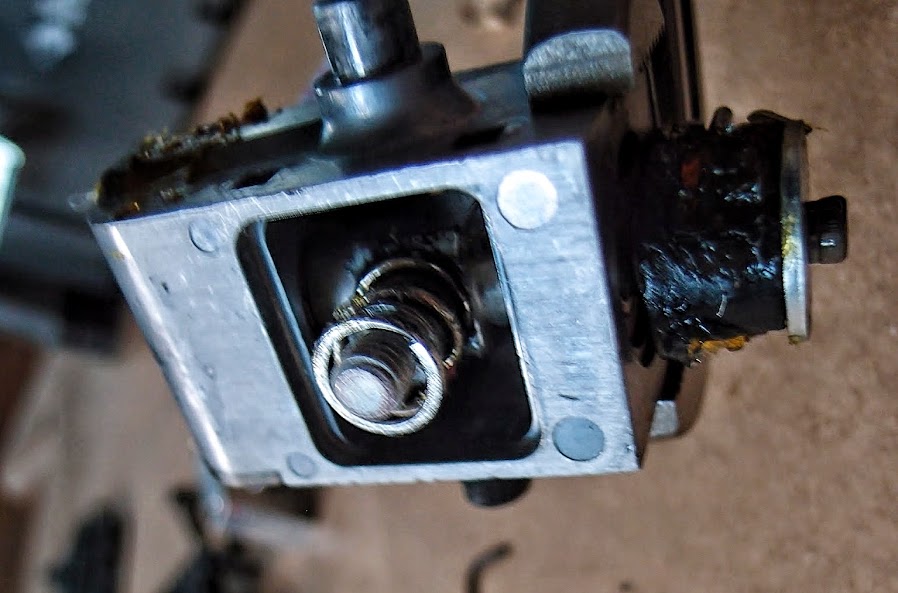 I ended up taking the plastic cover off, but don't think you actually need to.  It's also a bit of a pain because its attached by plastic tabs that are glued to the metal and can easily break. I broke one of mine. :( Oh well.

Next, you need to take out the potentiometer.  This was probably the trickiest bit for me, because I didn't have a tool small enough to hold onto the nut on the other wide of the allen bolt.  After pinning the edge of a forceps between the nut and the housing, I eventually got the bolts to unscrew.

Be sure to pull out the pot gently!!

Look inside where the pot was wedged, and you'll find a tiny allen bolt inside. This is the pin that holds the shaft in place. 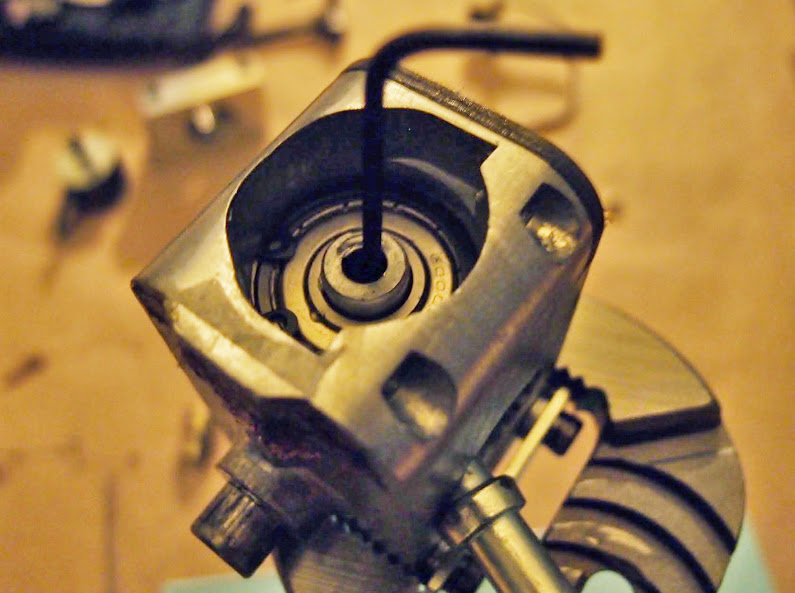 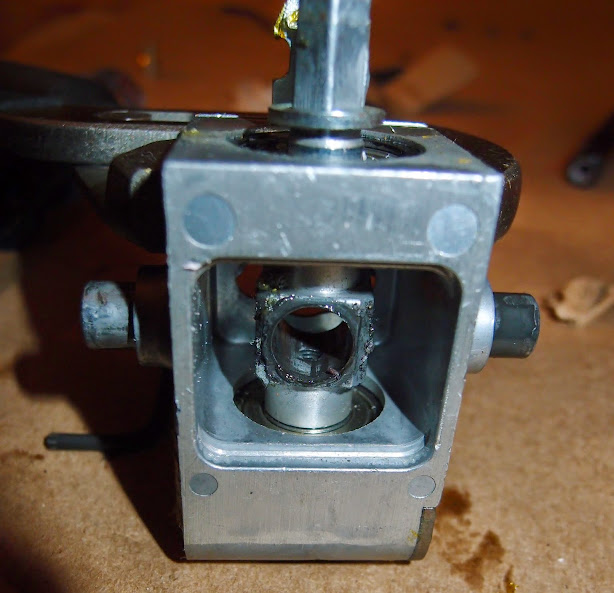 Unscrew the pin all the way out, and pull out the silver shaft. 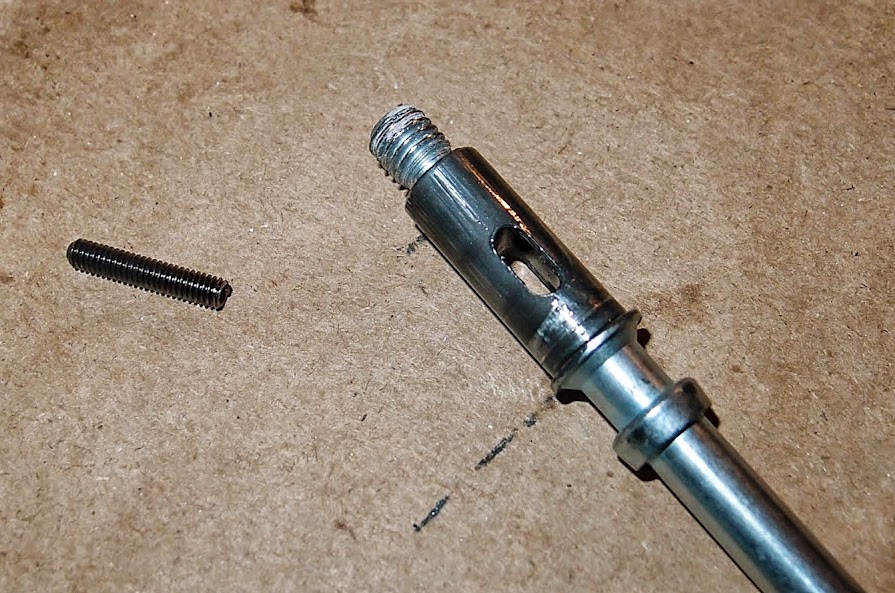 Two problems will become very obvious:
1. The opening of the shaft is a bit too wide for the nut, hence why it wobbles from side to side.
2. The nut is threaded all the way through, and I suspect is why when pressing the shaft for reverse, it's not the smoothest press in the world.

Enter can of Coca Cola!  Or anything metal that's thin enough that you can find.  The solution for me was to put in a small sheath along the opening to close the gap between it and the pin. I cut out a very small piece of aluminum like so: 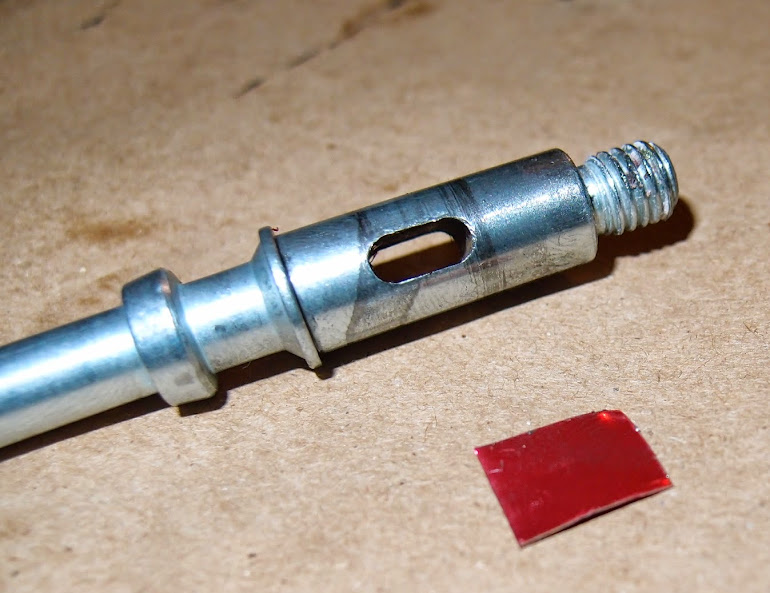 This requires a bit of finesse, but you'll figure it out. 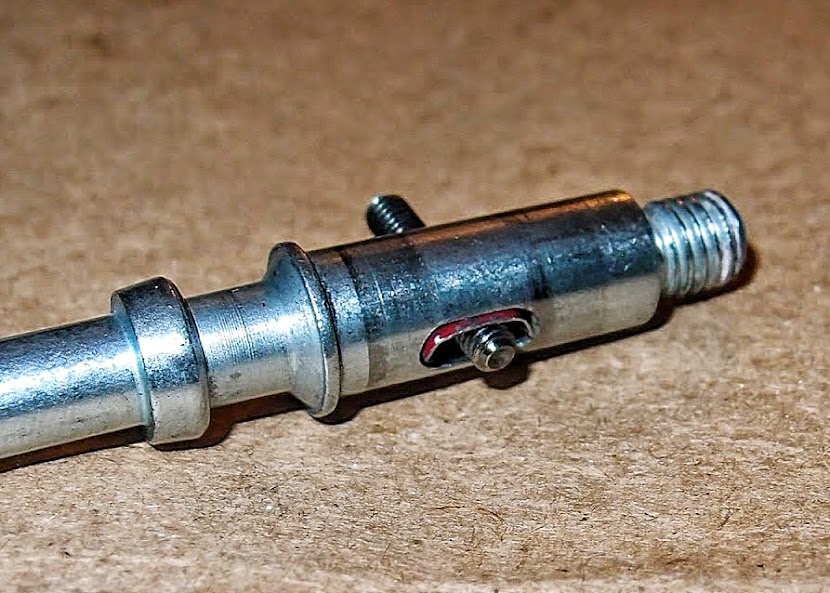 Regrease everything, because chances are all of the grease will be on you.
Put everything back together.

Pay attention from which side you slide the shaft back in!!